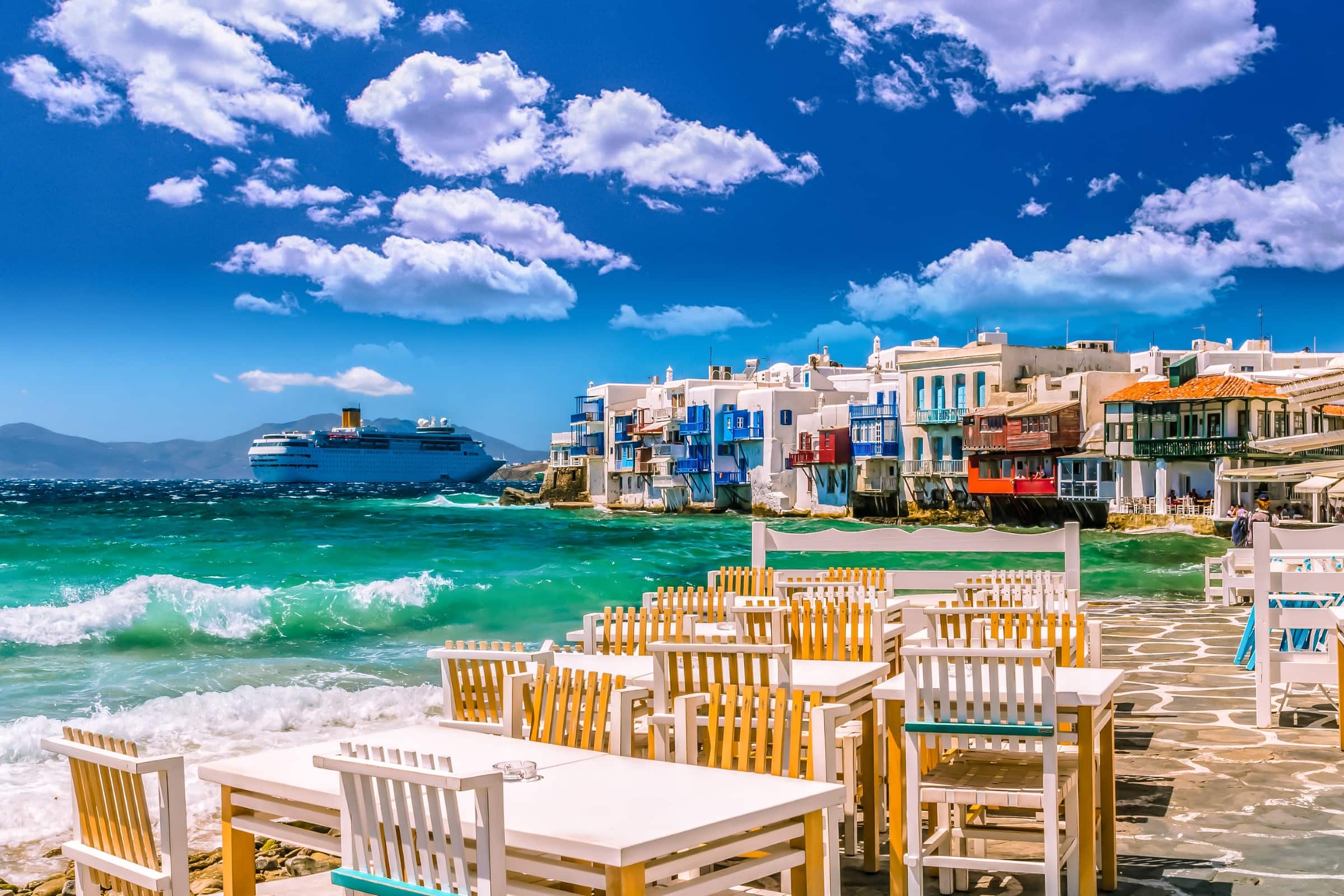 The international elite descends and depends upon Mykonos for all things luxe – nightlife, dining, yachting and shopping are in abundance on this island cosmopolis.

Mykonos might be most aesthetically known for its iconic windmills – the row of 16th-century structures sitting on a hill above town watching over its millions of sun-seeking tourists each summer. Yet Mykonos is also a destination renowned for its luxury offerings: shopping, dining, dancing, spas and decked-out beach cabanas are all on tap to make a high-end holiday possible.

Mykonos – known over the last turn of the century for its nude beaches and laissez-faire attitudes – has established itself in more recent years as a sophisticated hub of international social elite looking to relax by day and party by night.

Considering it was christened, in a way, by the globally chic royals, celebrities and style icons, such as former First Lady Jackie Kennedy Onassis, Grace Kelly, Brigitte Bardot and Sophia Loren, it’s no wonder the lure of the isle has endured.

The airport is currently undergoing a much needed €25 million (approximately C$36 million) upgrade to include two VIP lounges when it opens in 2021. There is also a new private jet service between Spain’s luxe party island Ibiza and Mykonos.

Located in the Cyclades group of Greek islands, Mykonos is surrounded by the turquoise waters of the Aegean Sea and features white-washed and cobalt blue-topped buildings, typical of Greece. To add to that old-world charm, it has built up an impressive repertoire of indulgent shopping.

In town, along the meandering cobblestone alleys is a vast array of clothing boutiques and luxury brands, local jewellers and artists. To name just a handful of the dozens and dozens of shops in Mykonos, expect to find Louis Vuitton, Chanel, Hermes, Soho Soho, and Enny Monaco.

Most of the stores are open from 10 a.m. until well after dark, some even staying open until after midnight to accommodate vacationers from different time zones or just that last-minute dress needed for a special outing.

This kind of consideration is typical of the offerings that can be found on the island – Mykonos is always looking to accommodate its guests to the utmost. And if you’re needing a private shopping experience, that can be arranged as well by speaking to a concierge or local service.

Despite the close quarters of the town, privacy isn’t impossible. On Mykonos, there is no shortage of luxury hotels and villas that will pamper guests.

In fact, their competition only ups the experience for those looking to be treated to exquisite food, amenities, and experiences. Consistently on the top lists for luxe Mykonos hotels is the Myconian Collection, 10 five-star properties, including three coveted Relais & Châteaux properties.

The Satori Thalasso Spa at the Myconian Korali is especially decadent, with five pools in warm and dimly lit rooms that smell of eucalyptus and the ocean. They are thalassotherapy pools – from the Greek word “thalasso” meaning “sea,” which is the practice of using seawater and sea products to rejuvenate the body.

The therapeutic experience harkens back to ancient Greeks and their belief that the sea is a resource for both cleansing and curing. Each pool has a different temperature, essential oil and hydro massage to enliven the senses.

But perhaps most unique in the Korali spa is the Salve-in-terra Therapy, an all-sensory couples’ treatment that involves a full-body clay wrap and a hydro bed in a private room that rains on you just before the session is concluded.

Eating on Mykonos is not just a matter of sustenance, but at the high-end restaurants on the island, it’s about satisfying indulgence while balancing health, something that is standard in gastronomic circles of the wealthy.

Myconian Ambassador’s main restaurant, Efisia Fine Dining, is named after the Greek word “physis” – the theological, philosophical and scientific term for “nature.” A native of Thessaloniki, Executive Chef Ilias Maslaris takes as much pride in his farm-to-table ingredients and the fishermen’s catch of the day as he does his overall presentation.

In fact, the fisherman they work with only supplies fish for himself and Efisia Fine Dining, preferring to keep his secrets on the best fishing spots under his close eye. Dishes are seasonal and fresh, always paying homage to their Greek roots.

The wine list is comprised of some of the best Greek vintners, and even their salt comes from the rocks of the ancient neighbouring island of Delos. Myconian Collection founder George Daktylides rears the lamb on family land.

To see-and-be-seen, Nammos Mykonos on Psarou Beach is the ticket to titillating nightlife. A flashy beach restaurant serving local fish and European fare for dinner, Nammos becomes the club to be at after sundown.

Make sure to book reservations well in advance, gaining you entry to the bar and club where sightings of celebrities such as Leonardo DiCaprio, Bella Hadid, and the Kardashians are known to happen. In Nammos Village, just behind the bar and restaurant, there’s an enclave of luxury boutiques including Gucci, Burberry, and a Dior store, where Kate Moss DJ’d on opening night last year.

For a more relaxed but equally swanky evening activity, 180° Sunset Bar above town promises unparalleled – and unending – views of a Mykonos sunset.

If the crowds become too much, day trips to the neighbouring islands of Tinos or Delos are available. Delos is a wonderful dose of culture and history, an uninhabited island that has a museum and ruins of an ancient town that once stood there.

Tinos, which is only accessible by boat/ ferry, has dozens of pristine beaches (without the troves of tourists) where you can anchor your yacht for the day. Or there is Thalassaki restaurant, which has a pier where helicopters can land and cater to visitors looking for a relaxed and decadent, meal off-island.

Whatever your pleasure – literally – Mykonos can provide.