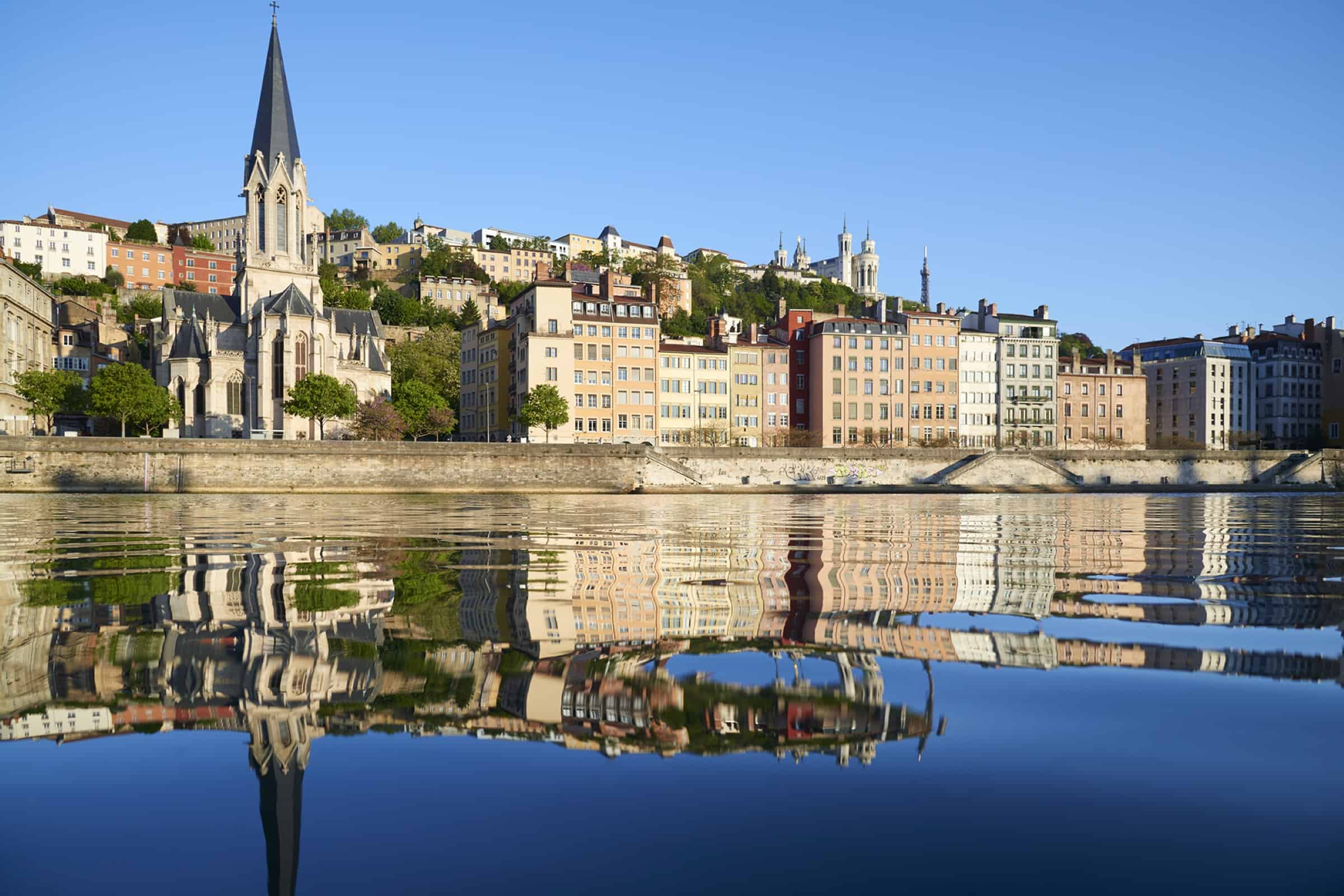 From romantic cities to foodie havens and artistic epicenters, this itinerary enlivens all your senses. Embark in Lyon, France’s culinary capital, and enjoy an evening illumination cruise. Savor the beauty of legendary vineyards and imbibe in local vintages like Beaujolais and Côtes du Rhône. You can even become an expert in all things culinary: go in search of the highly prized “Black Diamond” truffles; learn how to pair chocolate with wine; and discover how olives turn into the Mediterranean’s nectar, olive oil. Trace the steps of famous artists in Arles and Carriéres de Lumiéres before your return flight home. 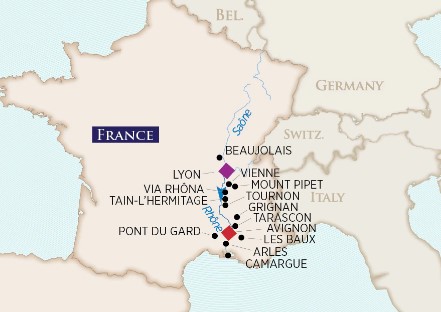 No items found.
Pricing
Call for pricing!
Pricing is per person, in CAD and based on double occupancy. Additional terms & conditions apply.

Board the ship for your Colors of Provence cruise. (D)

Discover dynamic Lyon, starting in Fourvière Hill, part of the city’s historic region that is now a designated UNESCO World Heritage Site and home to the 19th-century basilica Notre-Dame de Fourvière. Continue on to the old town of Lyon, followed by a guided walk through the St. Jean district, where you will be introduced to the city’s unique covered walkways, known as “traboules.” Alternately, join a guided bike tour through the city designed with cyclists in mind. In the afternoon, enjoy the rest of your day at your own leisure to explore the city. (B,L,D)

Travel to the Beaujolais wine region—known as the Pays d’Or or “land of the golden stones.” Indulge in a wine tasting at a traditional winery and learn about the history and techniques of their vineyard. (B,L,D)

Situated between the wine regions of Beaujolais and Côtes du Rhône lies Vienne with a Roman past that can be seen in its marvelously preserved ruins. Follow the footsteps of the ancient Romans on a walking tour to see the amazingly well-preserved Augustus and Livia Temple, the Saint Maurice Cathedral, a Gothic church that took more than 500 years to build, and St. Pierre Abbey—one of the oldest surviving churches in France, and now an Archaeological Museum. For those wishing to be more active, you can either take a guided hike from the ship to the Monastery at Mount Pipet or a guided bike tour along a portion of the ViaRhôna bike route. (B,L,D)

You have a choice of three excursions. Take an exclusive private train ride past magnificent landscape carved along the Gorge du Doux, stopping at the charming little station of Colombier le Vieux-Saint Barthélemy le Plain, where the train maneuvers in preparation for its return journey. Alternatively, lovers of wine and chocolate will want to visit Le Château de Tournon for a presentation and tasting on the pairing of red wine and chocolate. For a more active adventure, take a hike through the vineyards of Tain l’Hermitage, followed by a visit to a local winery where you’ll sample some of the wines. (B,L,D)

Provençal town Tarascon is known for its medieval architecture and charming tales – especially the legend of the Tarasque monster. Join a guided walking tour where you’ll visit the Roman ruins of Arles such as its Roman Amphitheater and the Church of Saint Trophime, famous for its Romanesque architecture. Alternatively, you can enjoy a bike ride along the Rhône, through town to the Langlois Bridge, a famous subject from several Vincent Van Gogh paintings. And for those who wish to delve further into Van Gogh’s Arles, join a special walking tour along with a visit to the Vincent van Gogh Foundation, showcasing his legacy. During the afternoon, you’ll visit the enchanting medieval fortress, the Castle of Tarascon – a fortress designed to protect but surprises all with its elegant interior, fit for royalty. Or, delve deeply into the Carrières de Lumières, where you’ll be treated to a spectacular presentation of art, sound and history projected on the former limestone quarry walls of caves. Alternately, you can enjoy an excursion to explore the medieval, walled village of Aiges-Mortes. Then, you'll drive to the beautiful Camargue National Park, a protected natural territory that lines the Mediterranean Sea south of Arles. Afterwards, venture to the medieval hilltop village, Les Baux de Provence. In the evening, enjoy an illuminations cruise around Avignon. (B,L,D)

Depending on your interests, you have three choices of excursions for the morning. Avignon, aptly named the “City of Popes,” was the center of the Catholic Church in the 14th century when its “Palais des Papes” was the equivalent of today’s Vatican. Discover the history of Avignon on a guided walking tour that includes the Papal Palace and the well-preserved medieval walls surrounding the historic center of town, a UNESCO World Heritage Site. You can visit three venues around Avignon to taste regional specialties including macarons, cheese and wine, and tapenades or you can enjoy a bike tour. During the afternoon, you can go to another UNESCO World Heritage Site, the impressive Pont du Gard, a Roman aqueduct that is a masterpiece of ancient engineering. Alternately, you can go to the magnificent hilltop village, Grignan. After visiting this enchanting Provençal town, go in search of the highly prized “Black Diamond” truffles with a farmer and his trustworthy canine companion. (B,L,D)

Bid farewell to Avignon and prepare for your flight home. (B)

New bookings only. Fares are per person in the currency noted (CAD), based on double occupancy, are capacity controlled, subject to availability at the time of booking and may be withdrawn without notice. Optional supplier charges may apply and are not included. Amenities, if offered, are available for the first two in a stateroom only & based on double occupancy unless specifically stated otherwise. CruisePlus reserves the right to correct any human or electronic errors throughout the website at anytime.

Fill up the form and our Team will get back to you within 24 hours.

3018 Ross Road, Nanaimo, BC
Thank you! Your submission has been received!
Oops! Something went wrong while submitting the form.