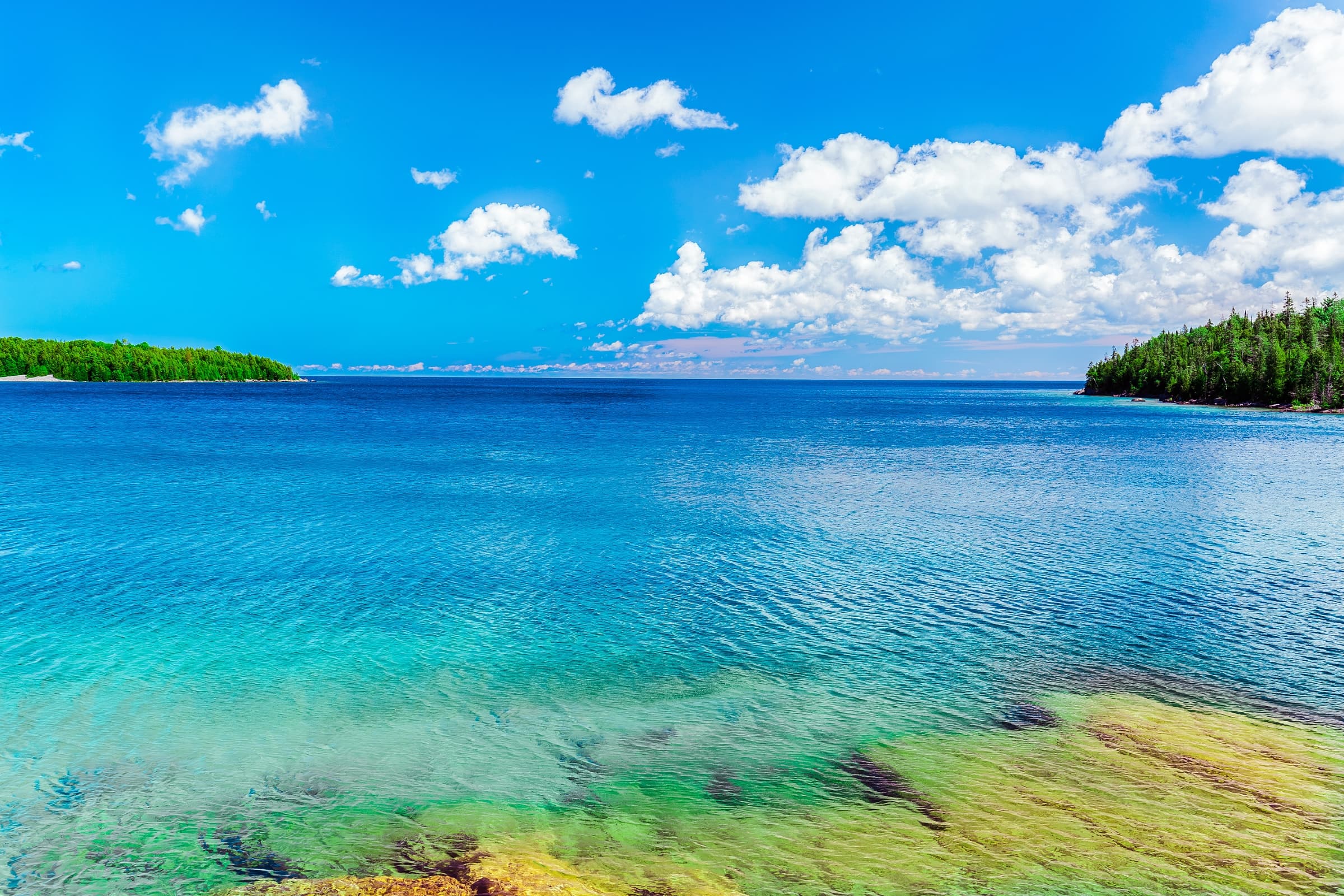 Join Viking for a unique expedition across the historic waterways of all five of the majestic Great Lakes. Experience culture-rich urban centers and admire the breathtaking power of thundering Niagara Falls. Explore the granite islands and sheltered inlets of Georgian Bay and traverse the famous Soo Locks. Study the aquatic ecosystems of the lakes and venture into the dense boreal forests that line the shores of Lake Superior and Lake Michigan.

Embark your ship and settle into your stateroom. Duluth was named for French explorer Daniel Greysolon, Sieur du Lhut, who explored the St. Louis River in 1679. In 1808, famed merchant John Jacob Astor established the American Fur Company. Copper and iron ore mining swelled the population in the 1850s, while construction of channels and locks to the east allowed larger ships to access the city. Today, Duluth celebrates its history and culture with a wide array of museums and landmarks, including its famed Aerial Lift Bridge spanning the Duluth ship canal.

Thunder Bay is known as “Canada’s Gateway to the West” for its location at the final navigational point on the Canadian side of Lake Superior. Originally founded as a fur trading post, a settlement was established in 1803 and Fort William was erected. In 1970, Fort William and neighboring Port Arthur were merged to form the City of Thunder Bay. Today, it is one of Ontario’s most vibrant cities and a center of art and culture. Its Waterfront District is beloved for its views across the bay of the Sleeping Giant, a long line of mesas that resemble a giant lying on its back.

Lake Superior is the largest of the five Great Lakes and one of the largest bodies of freshwater in the world. Its scenic shoreline is dotted with deep bays, hidden inlets and high cliffs that lead to thick boreal forests. As you sail today, attend an informative lecture or watch a film on our 8k laser-projected panoramic screen in The Aula, one of the world's most advanced venues for learning at sea. This indoor-outdoor experience allows nature to take center stage with its retractable floor-to-ceiling windows that unveil 270° views.

Founded by French missionaries in 1668, Sault Sainte Marie is Michigan’s oldest city and one of the oldest in the US. It is also home to the famous Soo Locks, a series of parallel locks that make river travel between Lake Superior and Lake Huron possible, thereby linking Superior to the lower Great Lakes and the Atlantic Ocean. Opened in 1855 to allow ships to bypass the St. Marys River’s 21-foot fall over roiling rapids, this innovative lock system was one of the great engineering projects of its day. Today, it guides ships past Sault Sainte Marie and its twin city in Ontario.

Steeped in the charms of simpler times, Mackinac Island is a gem of the Great Lakes. Located in the Straits of Mackinac where Michigan’s upper and lower peninsulas are closest and Lakes Huron and Michigan meet, this bucolic haven preserves gilded Victorian-era treasures along car-free streets traversed by horse-drawn carriages. The perimeter road is the only state highway in the US that does not permit motor vehicles. More than 80% of Mackinac is protected as a state park, from its Greek Revival Grand Hotel and British-built Fort Mackinac to its preserved wilderness areas.

Algoma is the gateway to the scenic Door Peninsula, a slender limestone peninsula projecting out into Lake Michigan. It was first explored by French missionaries and fur traders during the 17th century, who named it Port des Mort, or “Death’s Door,” because of the treacherous waters separating the peninsula from nearby Washington Island. The peninsula is also the westernmost edge of the Niagara Escarpment, a prehistoric ridge that stretches more than 650 miles across the Great Lakes region, and is home to boreal forests, rugged rock formations and sandy beaches.

Alpena is the largest city in Michigan’s thinly populated lower peninsula. The town faces Lake Huron’s Thunder Bay and is home to Alpena Light, a brilliant red steel structure built in 1914. After its founding in 1840, fishing and logging were introduced to bolster its economy; today it is home to one of the largest limestone quarries in the world. Two of its architectural gems are listed on the National Register of Historic Places: the art deco County Courthouse and the late-Victorian IOOF Centennial Building, once the city’s courthouse.

Discover the magnificent UNESCO Biosphere Reserve of Georgian Bay. The pristine shores of Frazer Bay, Killarney and Parry Sound are best explored by kayak or RIB while peaceful walking trails lead into the woodland realms of native flora and fauna. The beloved Thirty Thousand Islands stretch along the lakeshore for 120 miles, forming one of the world’s largest freshwater archipelagos. Among art lovers, this area is known as the picturesque subject of the Group of Seven, a prolific cadre of 1920s and early 1930s landscape painters inspired by the natural world.

Windsor is situated on the south bank of the Detroit River across from Detroit. Several transportation routes connect the two cities, including the Ambassador Bridge, the busiest international border crossing in North America. Its strategic location has made Windsor a major Great Lakes port and a center for industry, even earning itself the moniker, “The Automobile Capital of Canada.” Historically, it was an important stop along the Underground Railroad prior to the Civil War and a key port for the smuggling of alcohol into the US during Prohibition.

Cleveland sits on the shores of Lake Erie at the mouth of the Cuyahoga River and is a major port along the St. Lawrence Seaway. This industrial city is also a gateway to the Cuyahoga Valley and its namesake national park, a region of reclaimed nature covering 51 square miles of landscape between Cleveland and Akron. A mix of forests, wetlands and canals, as well as the majestic cascade of Brandywine Falls, the park has more than 125 miles of hiking trails that crisscross the land, including one that runs along the former route of the Ohio and Erie Canal Towpath Trail.

Port Colborne proudly proclaims itself the “Gateway to Navigation.” It is also the gateway to North America’s largest and most powerful cascade, Niagara Falls. Epic in its scope and volume, the falls hurl 42 million gallons of water down 20 stories every minute. Its mile-wide length straddles the Canadian and US borders and is split by islands into three smaller cataracts: Horseshoe Falls, Bridal Veil Falls and American Falls. Long a storied destination for young honeymooners, today the mighty torrent is a thrill for visitors.

The Welland Canal is one of Canada’s greatest engineering feats. Built from 1824 to 1833 to bypass the Niagara River and its mighty falls, the Welland comprises eight locks that lift or lower ships a total of 326 feet between Lake Ontario and Lake Erie. This scenic canal is the spine of the peninsula’s trade and industry, with numerous docks receiving ships and roadways crossing the water by either bridge or tunnel. Of the former, most open via vertical lift or drawbridge, allowing ships to pass along its waters.

Toronto is beloved by many as one of Canada’s boldest and most innovative capitals. Hugging the shores of Lake Ontario and facing the picturesque Toronto Islands, it was founded by British loyalists fleeing the American Revolution in 1793. Today the city is a pleasure to explore on foot, whether strolling past the Victorian bay-and-gable homes of Rosedale, or the historic enclave of Wychwood Park, an Ontario Heritage Conservation district. The city’s Distillery District is home to North America’s largest preserved collection of Victorian industrial architecture. After breakfast, disembark your ship and journey home. 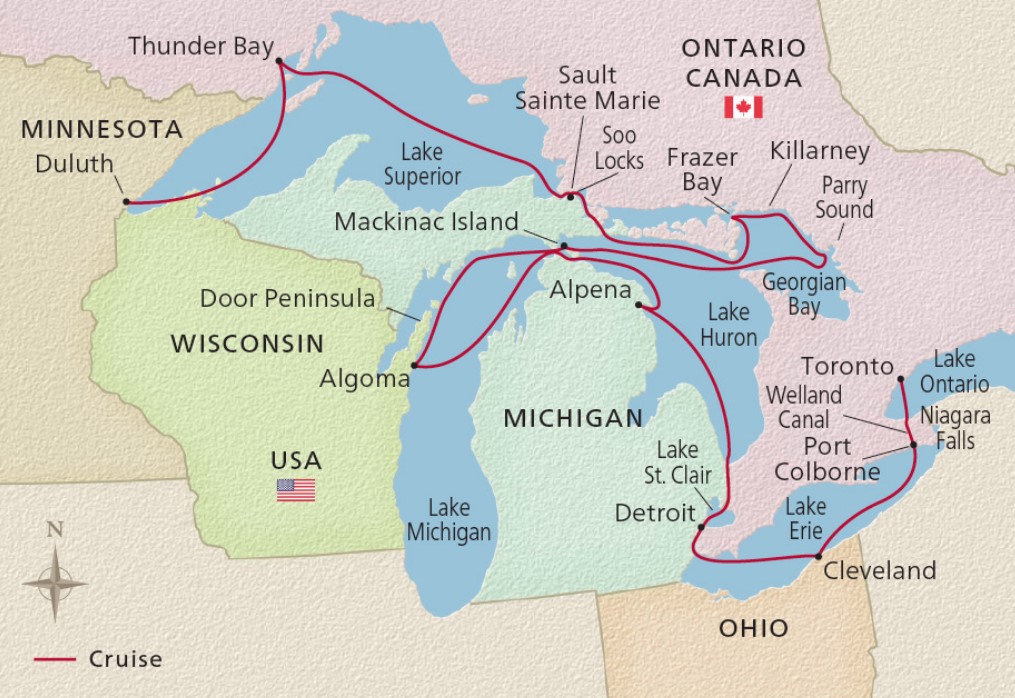