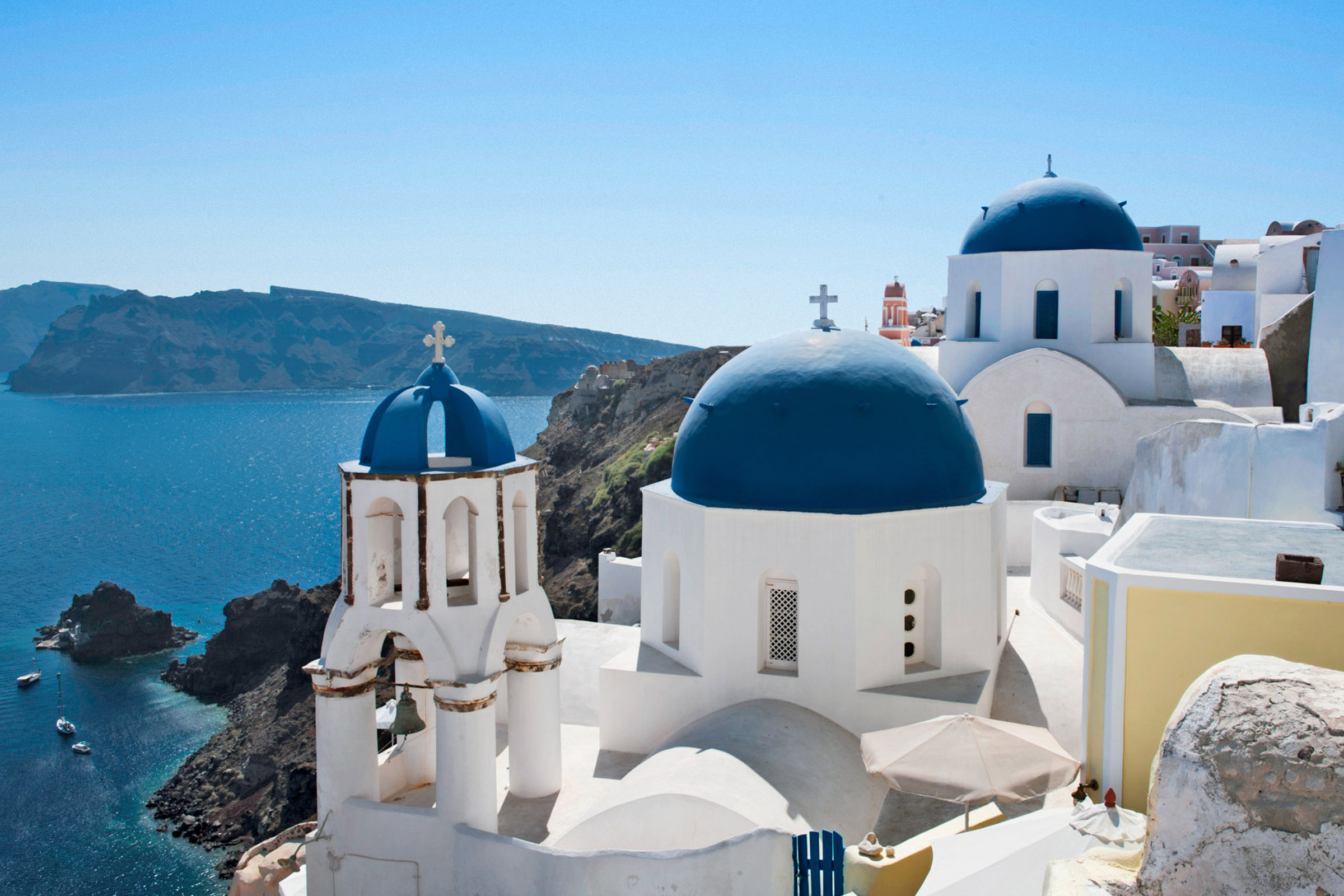 Explore the Aegean Sea during a 10-night voyage to important sites of antiquity. Visit Athens, the “birthplace of democracy,” and Crete, home of the mysterious Minoan civilization. Admire whitewashed buildings with azure domes in Santorini and walk the streets of Rhodes to the imposing Palace of the Grand Masters. You will also call on Volos, Ephesus and Nafplio during your cruise through several millennia of culture and history. 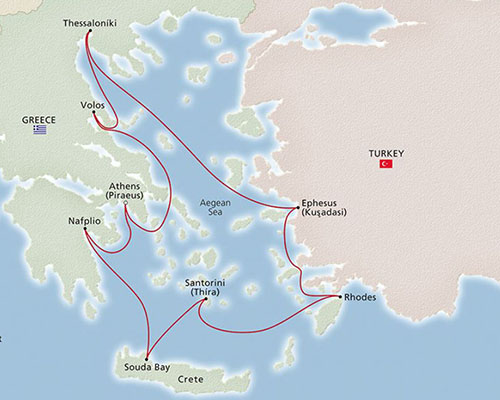 These magnificent ruins are an iconic temple complex built on Athen’s rocky hilltop in 5th century B.C. The Acropolis is visible from most parts of the city and acts as a hub in which Athens revolves around. A brilliant sight day or night, take it in from your hotel balcony or opt for a closeup view with a tour up to the top.

Enter the city though the Magnesia Gate entrance and walk down a marble road to the ruins of this Roman provincial capital. The major sites are the Odeum, the Celsus Library, the Temple of Hadrian, the Fountain of Trajan and the Great Theater. The theater had seating for 25,000, and is the site where St. Paul preached to the Ephesians.

Step on board in Athens, where you will have an entire day to explore this ancient city. Perhaps visit the Hellenic Parliament, Syntagma (Constitution) Square, the Panathenaic Stadium, the Temple of Zeus or the iconic Acropolis. Explore the bustling Plaka District at the base of the Acropolis. As we remain in port overnight, you will have time to enjoy dinner in town.

Today, you will have the entire day to journey into ancient Athens via a panoramic drive, passing the promenade at Mikrolimano Marina as you enter the city’s heart. There, you will see the Hellenic Parliament, Syntagma (Constitution) Square, the Panathenaic Stadium, the Temple of Zeus and the iconic Acropolis. Explore the bustling Plaka District at the base of the Acropolis. Or, as an option, explore the interior of this UNESCO Site; climb 80 steps to the entrance for an unforgettable view of the Parthenon at its peak.

Today, you will arrive in Volos, a major port in the central province of Thessaly. Explore the local archaeology museum before driving to the beautiful Mt. Pelion region, just outside Volos. Admire the region’s blend of nature and picturesque villages, once thought of as the playground of the gods. You will also have the opportunity to explore Greece’s rich heritage outside Volos. See the stunning scenery of Meteora, where medieval monasteries stand precariously on hilltops, or explore the ancient religious center of Dion located on the foothills of Mt. Olympus, the home of the gods.

Today, you will arrive in Thessaloníki, Greece’s second-largest city. Here, an exhilarating mix of ancient culture and modern life awaits you. Walk the vibrant waterfront promenade with its many cafés and restaurants, or explore the neighborhoods farther up the hill, where you can enjoy the sunset from the Byzantine walls or admire the neoclassical mansions of the old Jewish Quarter. Outside the city, the remains of the ancient Macedonian kingdom of Alexander the Great are accessible in the city of Pella and the Royal Tombs of Vergina.

Today, sail past the majestic slopes of Mt. Athos, a UNESCO World Heritage Site and the spiritual capital of Orthodox Christianity. Called the “Holy Mountain,” this peninsula has been a revered monastic site for centuries. Today, it is home to 20 monasteries whose monks work to preserve and catalogue a vast collection of liturgical works and art. According to legend, the peninsula was gifted to the Virgin Mary by Jesus. To this day, no women are allowed within almost a half mile of its rocky shores. Enjoy scenic views of the mountain and the ancient monasteries that line the coastal cliffs before continuing on into the Aegean Sea.

Journey into the ancient world today with a visit to Ephesus, one of the best-preserved cities of antiquity in the world. Stroll the uneven streets of this once-powerful metropolis and pass sights such as the massive Great Theater and the magnificent Library of Celsus. Visit the remains of the Byzantine Basilica of St. John and see the modest home where legend states that the Virgin Mary lived out her final days. Or, take a scenic drive to the Oracle of Didyma and the Temple of Apollo, part of a once-elaborate Hellenic sanctuary.

Discover the Old Town of Rhodes today. This “Island of Knights” prospered from the wealth brought here from the Holy Land by the Knights of Saint John of Jerusalem. Follow the Street of the Knights to the most imposing building in Rhodes: the Palace of the Grand Masters, a UNESCO World Heritage Site. Tour this fascinating building, which was first a castle, then a royal palace. Our berth is near the city’s historic quarter, allowing you to linger at your leisure after your included walking tour. Or, opt to visit the Acropolis of Lindos; from its rocky perch, you will have magnificent views of the whitewashed village and harbor below.

Gliding toward a full day in Santorini, prepare for its spectacular caldera and looming cliffs. Once anchored, embark a local boat for the island’s main port of Athinios. On your included excursion, drive with a local guide to the top of Mt. Profitis, where you can take in spectacular views of the island, the Aegean Sea and the summit’s monastery. En route to clifftop Oia, take in the beauty and charm of the countryside and traditional villages. Then enjoy free time in the capital of Thíra. Alternatively, visit the hot thermal springs of Palea Kameni island and enjoy the most remarkable swim of your life. Or, choose to visit a Greek vineyard for a tour and tasting.

Disembark today in Souda Bay, an important port since antiquity because of its natural harbor and location along Mediterranean trade routes. Visit the remnants of the once-grand Palace of Knossos, the center of the Minoan kingdom that ruled over the island of Crete from approximately 2600 to 1100 BC. Or, tour an olive oil factory and winery to learn how these ancient Cretan traditions have been influenced by modern production techniques. Alternately, see the influences of former rulers such as the Venetians and Ottomans during a walking tour of Chania’s Old Town.

Call today on Nafplio, where you can admire one of Greece’s most beautiful and romantic port cities. Explore the narrow streets of the Old Town and discover the charms of its Venetian homes and Byzantine churches. If you wish, drive to Palamidi, an imposing fortress towering over the city, to view its sweeping vistas. Or, travel to the Peloponnese peninsula, an ancient area rich in history, including the mighty citadel of Mycenae, the ruined spa town of Epidaurus and the ancient center of the Panhellenic Games in Nemea.

Arrive in Athens this morning, the magnificent cultural capital of ancient Greece. You will disembark your ship and depart for home. Or spend more time uncovering the mysteries of this fascinating city, the hilltop Acropolis and the inviting Plaka District.

Pricing, amenities, itinerary and availability may change anytime without notice and many not be reflected immediately on this page.
This deal was last updated on Jun 16, 2021.